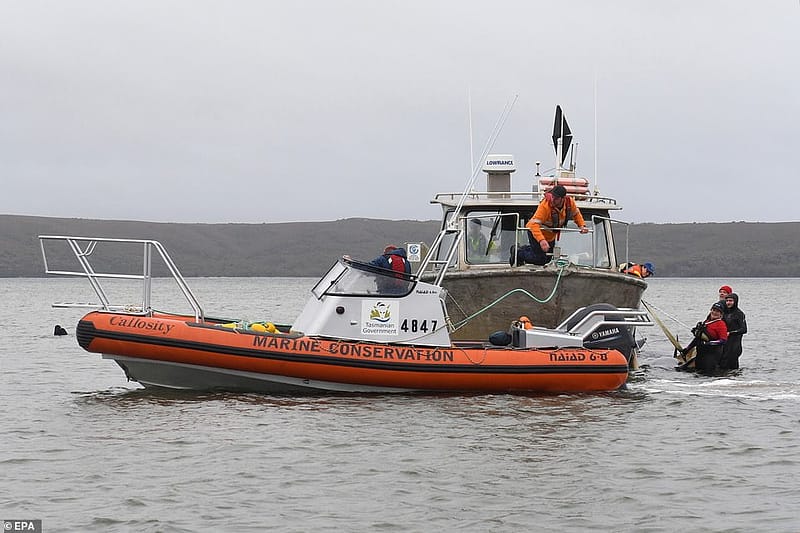 Nearly 380 pilot whales have been confirmed dead off the coast of Tasmania as rescuers battle to save the remaining few that are still alive in one of the world’s largest-ever mass strandings.

Authorities have confirmed that a total of more than 470 marine creatures were discovered on Wednesday morning about five kilometres south of the original stranding site at Macquarie Harbour, the largest in the country’s history.

Some 50 whales were successfully rescued and coaxed back to the open ocean, but the remaining 30 animals still alive remain stranded on a shallow sandbar off Tasmania’s west coast.

The search effort was initially launched on Monday after 270 were spotted struggling in shallow water.

Rescue teams are now racing against the clock to save the whales, with Parks and Wildlife regional manager Nic Deka conceding time is quickly running out.

‘I would expect that we would shift through a transition from rescue into the retrieval and disposal effort … we’re just considering options at present,’ he told the ABC.

Hampering rescue efforts are ‘ugly’ conditions, including cold temperatures and rain, though Carlyon added that the conditions will help the whales survive longer by keeping them wet and cool.

Beached whales most often die of dehydration. The animals have a thick layer of blubber that keeps them warm in deep-sea temperatures but causes them to rapidly overheat near the surface.

A stranded whale may also be crushed to death by their own weight, without water acting as a support, or else if they are stranded in deep water, they may drown if their blowholes are covered.