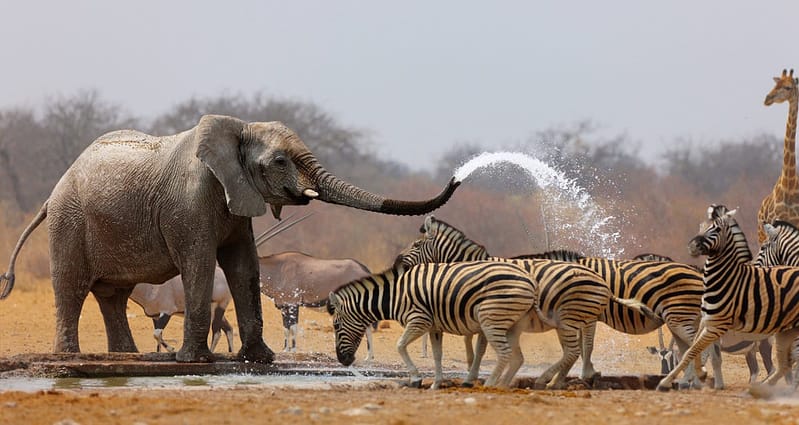 Africa is home to people of different cultural orientations and backgrounds, and just as diverse are her ecological and biological resources. Her status as a tropical region makes her a hotbed of biodiversity, and there are many species of plants and animals that can only be found in Africa.

Sadly, however, Africa’s abundant and vast wildlife is severely threatened.

An assortment of factors – some natural, some man-made – have combined to ensure that the continent plays host to eight of the 34 biodiversity hotspots globally.

The consequences of this are severe and widespread. Africa finds herself even more vulnerable than others instead of being just an interested onlooker as the rest of the world struggles to come to terms with global warming. The implications are severe, especially when considering that the continent still adopts a cavalier attitude towards conservation.

Here are the biodiversity hotspots in Africa:

Located in Northeast Africa, the horn of Africa extends from Oman to Yemen, cutting through Eritrea, Somalia and Kenya. It is shaped like the horn of a rhinoceros, hence its name.

The horn of Africa is home to over 2700 species of endemic plants, ten endemic species of freshwater fish, over 90 species of birds and over 220 species of vertebrate mammals. Several of these life forms are threatened by extinction, and at this rate, some of these exotic animals and plants may soon only be found in picture books and museums.

Human activities such as overgrazing and unsustainable charcoal harvesting have combined with depleting this region’s natural resources.

The Succulent Karoo is home to many succulent plants, most of them endemic to Africa. Almost a third of these plant species in the world can be found in this region. This biome also hosts 68 mammal species, 431 avian species, 27 amphibian species, and 121 reptile species.

It runs through South Africa and Namibia and is the world’s only arid hotspot. The region’s favourable climatic conditions easily support life forms and are one of the reasons for the high proliferation of biological life.

This region has been dramatically affected by deforestation and logging activities. Thankfully, the government of Namibia and South Africa have put structures in place to assist conservation.

Running from Guinea and Sierra Leone in the west to Cameroon’s Sanaga River region in the east, this biome hosts a wide range of plant and animal species, several endemic.

About 9000 species of plants and 390 terrestrial species of mammals can be found in this region, which translates to about a quarter of the documented total in Africa. Two of the rarest antelopes in the world also live here, and a whole host of other life forms are supported by this biome, making it one of the most biodiverse regions in the world.

Madagascar and the Indian Ocean Islands​

As can be expected, this hotspot supports various marine life forms. Apart from this, though, it is also home to several plants and animal species. A considerable number of these plants and animals are endemic to this region. To put this into context, there are 99 species of lemurs in Madagascar, all of which cannot be found anywhere else. Other species endemic to Madagascar include the fanaloka and fossa.

This biodiversity hotspot is located in South Africa and has a protected status. It is also one of the world’s five Mediterranean hotspots and holds the record as the only hotspot encompassing an entire floral kingdom.

As the name implies, this biome boasts a vast diversity of flowers and fauna, with almost 9000 species of vascular plants present here. About 69% of these plants are endemic to the region. Also, several animals, including many antelope species, the geometric tortoise and the cape sugar-bird, make their homes here. This biodiversity hotspot boasts immense economic potential.

Encompassing the southern parts of Mozambique and the KwaZulu-Natal province of South Africa, this hotspot boasts significant levels of biodiversity. Its rugged topography and temperate climate make it ideal for biological life.

This region supports a high number of endemic flora and fauna. It houses most of South Africa’s natural forest and holds the distinction of having the highest tree diversity of temperate forests globally.

This biome can also be regarded as the face of Africa, with the animals commonly associated with Africa, such as Lions, Elephants, Buffaloes, Leopards and Rhinos, making their homes in this region. The activities of humans have significantly impacted the population of these animals negatively.

Stretching from Yemen in the North to Zimbabwe in the South, the Eastern Afromontane is an extraordinary hotbed of biological life.

This region is one of the most biodiverse globally, with over 7600 plant species, out of which about 2350 are endemic to the area. It also plays home to more than 150 species of endemic birds (1300 in total) and several endangered mammals. You’ll also find more than 323 amphibian species and 350 reptilian species here, with hundreds of different fish species.

The Albertine Rift in this region supports 620 species of endemic fish and over 5800 plant species.

Located along the east coast of Africa, this biodiversity hotspot is a collection of several small forests that are remarkably diverse, especially in plant life.

This tropical moist forest region stretches from Somalia and cuts through parts of Tanzania and Kenya to Mozambique.

The forests in this area boast a remarkable level of biodiversity and endemism. A wide variety of plants and trees, alongside 158 species of mammals, live in this biome. Conversely, human activities have severely depleted the resources in this region.

The African continent’s biodiversity is facing an unceasing onslaught. Industrialisation, development, deforestation, poaching and human encroachment are just a few issues confronting the continent’s biodiversity. Drastic action needs to be taken to forestall further damage, as humans will be the biggest losers in the long run if the current trend continues.