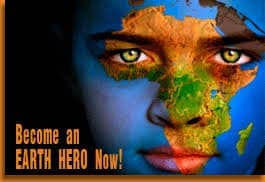 Oladosu Adenike, 25 from Nigeria is a climate and environment young hero that we in EnvironHeroes are proud of. according to her “My journey into the environmental movement started when i gained admission to study agricultural economics. Though i had heard about climate change before, i only realized that we were living through a climate crisis…” She is a country ambassador for Fridays for Future, Earth Uprising  and African Youth Climate Hub. Keep up the good work dear!!

William  Kamkwamba 28years Malawian  was forced to leave school at the young age of 14, however this did not prevent him from becoming the innovative genius he is today. By following information from an old textbook, William improvised with the materials around him and created a wind turbine using an old push bike and scraps. This single wind turbine powered his family home. His ambition and drive pushed him further as he created a solar powered water pump that supplied the first ever drinking water to his village. William’s story is inspirational and shows that recycling objects really can change the lives of those around you. William is exceptional.

Addison Barrett, 12, of Maryland, is one of the recipient of the 2019 annual Gloria Barron Prize for young heroes. she founded Gorilla Hero to raise awareness and funds to protect endangered mountain gorillas. she was able to raise more than $7,000 for the Dian Fossey Gorilla Fund and the Ellen Fund by selling homemade cookies and lemonade and hosting her annual Gorilla Gala. She is Awesome

Winnie Asiti, 30 year old Kenyan woman Winnie was born and brought up in Rift Valley Province of Kenya. Winnie has been deemed the next Wangari Matthai, which in itself is quite an achievement. However, Winnie is certainly paving her own way in the environmentalist world. She helped create the African Youth Initiative on Climate Change after attending the United Nations Global conference in Durban. Winnie is also on the Global Greengrants board that focuses on giving short loans to environmental causes and activists worldwide, giving out to over 9,000 projects.

Its no coincidence we have more female young environment heroes than guys. after all we have mother earth and not father earth because of the female caring nature. let me here your opinion on the comment section.

Which of this young heroes inspire you the most? kindly leave a comment, if yours is not on the list write to me